Endwell, NY – Visions Federal Credit Union’s fifth annual 4 on the 4th Road Race was held at Visions Headquarters on the morning of July 4.

Visions hosted over 400 members of the community at the event, including volunteers, runners, partners, and family members. Additional runners participated virtually, making this one of the largest years for Visions’ annual race.

For in-person runners, the race started and finished in the Visions Headquarters parking lot, where tents were set up with music, activities, giveaways, and refreshments.

“This year, our event staff focused on the whole race experience and the overall atmosphere of hosting a fun, family-friendly event,” said Kristina Albrecht, Visions’ Corporate Event Planner and 4 on the 4th Race Director.

“The finish line felt like a big community celebration.” As the 338 in-person runners finished the 4-mile course, participants were offered finisher medals, bottled water, and a catered breakfast, which included a beer or mimosa for adult participants. 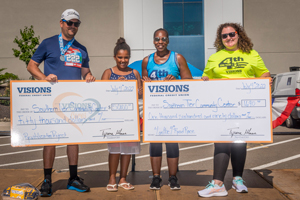 The race raised awareness and funds for charity partner, the Southern Tier Community Center (STCC).  The donation was accepted by STCC Director Nikki Post following the race’s awards ceremony. Representing Visions Cares, Community Development Liaison Jocelyn Bailey said, “Our events are for the community. Not only for the joy of them, but also for giving back to local causes.”