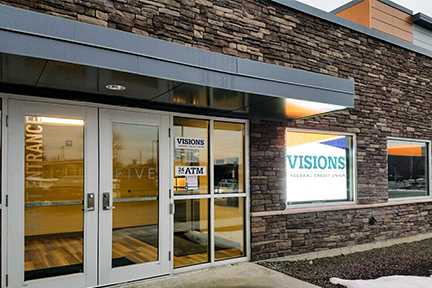 BINGHAMTON, NY – The Agency hosted today the official grand opening of FIVE South College Drive, a newly constructed economic and business development center in the Town of Dickinson. The Agency was joined by state and local officials and other building tenants including the Alliance for Manufacturing and Technology, the Greater Binghamton Chamber of Commerce, the National Development Council, the New York Business Development Corporation and Visions Federal Credit Union.

FIVE South College Drive, which is located on the south end of the SUNY Broome Community College campus is the first building to be constructed in Broome County for the purpose of co-locating business and economic development organizations. This project is fully funded through a $4,350,000 New York Economic Development Assistance Program grant secured by the late Senator Tom Libous.

A dedication to the late senator was made at the event, in the naming of the Senator Thomas W. Libous Community Room , a shared meeting space on the building’s first floor. Nick Libous, son of Fran and Tom Libous attended the event on behalf of the family.

The Agency, which is the owner and anchor tenant of the building moved to the building last September with other tenants following shortly after. Discussion on a “one-stop” facility is not new to Broome County and in the past, there have been many attempts to create a single location for economic and business development in Broome County, but none have gone so far as to construct a brick and mortar facility.

Kevin McLaughlin, executive director for The Agency said, “FIVE South College Drive is going to enhance our efforts to drive economic growth in Broome County. It will foster partnerships among the organizations located here and will be a central hub of activity surrounding business and economic development. It will also be a central location for businesses or developers looking to invest in Broome County. This has been a critical need in our community for a long time.”

"Today's grand opening represents years of work by many in this community to coalesce our economic development professionals and resources, said Terry Kane, The Agency's Board Chair. "Together we can accomplish so much more and in a much more efficient manner. The Board looks forward to the many successes that will result."

Senator Fred Akshar said, "My predecessor, Senator Tom Libous secured funding for this facility because he knew that co-locating our community's economic development drivers under the same roof would make it easier for our local businesses to find the help they need to be successful while opening doors for those looking to start their own new business here in the Southern Tier. It's great to see his vision come to fruition and I wish The Agency, their partners and the local businesses they help grow nothing but success."

“I am thrilled to see the grand opening of FIVE South College Drive,” said Crouch. “I look forward to seeing the progress and innovation that comes out of this new “one-stop’ shop for economic and business development in Broome County. The Southern Tier is on the way up, it’s good to see the opening of an economic hub that will maximize the potential that legislators, organizations and investors, see in the Southern Tier.” 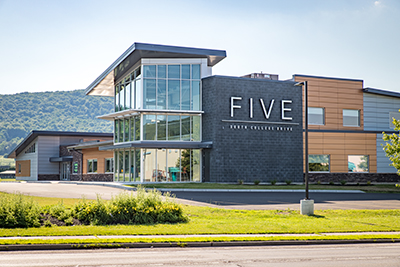 “This one stop shop is intended to foster collaboration among the agencies, making it convenient and accessible for all new and existing businesses. This approach is long overdue and I wish them all the best in their new location,” stated Assemblywoman Donna Lupardo.

Broome County Executive, Jason Garnar said, “Congratulations to The Agency on the grand opening of its new building in the Town of Dickinson. This one-stop shop will continue to drive economic development here and I look forward to continuing to work with all of our partners to bring new business, talent and opportunities to Broome County.”

“Congratulations to The Agency on the official opening of the new one-stop business development center. Bringing these organizations together is an important step to support job creation here in our community,” said Broome County Legislative Chairman Daniel J. Reynolds. “We appreciate all the support that the late Senator Tom Libous provided to The Agency and its Board of Directors in making this project a reality.”

"The Town of Dickinson is both proud and honored to be the host community of FIVE South College Drive,” said, Town of Dickinson Supervisor Michael Marinaccio. “We look forward to a long and productive working relationship with The Agency and congratulate everyone who was involved with this entire process including our Town Planning Board who assumed Lead Agency in the site plan approval process.”

Jennifer Conway, president & CEO of the Greater Binghamton Chamber of Commerce said, “Over the past few months, organizations, businesses and individuals have come together to tackle collaboratively many of the challenges facing Broome County.” “In 2017 we saw the power of bringing all voices to the table to develop the plans necessary to move our community forward. From the work of the United Way’s Anti-Poverty Initiatives to The Agency’s Broome Talent Task Force and smaller collaborations in-between, solutions to our greatest obstacles are coming to fruition. These initiatives have further confirmed the importance of like-minded organizations with similar missions coming under one roof. As I watch this all come together, we are excited for what this represents and what we will be able to accomplish as we come together in spirit, mission and power.”

“NDC has enjoyed a long and productive working relationship with Kevin McLaughlin and the Agency. I congratulate the Board of Directors and Mr. McLaughlin for recognizing the need, and developing this very important “one stop” economic and business development center in Broome County,” stated Daniel Marsh, president & CEO of the National Development Council. “NDC is proud to be a tenant in this magnificent building and a service provider to The Agency.”

Jim Conroy, regional president of New York Business Development Corporation said, “NYBDC is pleased to be moving our offices to be co-located with like-minded agencies with a common goal of helping small businesses in New York State, and the Binghamton area specifically, start, grow and thrive.”

Tyrone Muse, president & CEO of Visions Federal Credit Union stated, “Visions Federal Credit Union is excited about the opportunity to be in this economic hub for business development. The partnerships that can be formed with the organizations currently in and potentially in this facility is immeasurable. We are already finding additional benefits with the proximity of the SUNY Broome campus in acquiring talent, providing financial literacy and working with students to provide advisory roles to make us a better organization. We are hoping the energy we see in this facility continues to spread across the community and work in tandem with all the great works being provided by so many local organizations.”

FIVE South College Drive is a two-story building with a total of 17,500 square feet. The building was designed by Delta Engineers and constructed by Fahs Construction Group.