A New CEO, A New Vision For A New York Credit Union

When Ty Muse became the CEO of Visions FCU in 2013, he brought new ideas and a new leadership style to the Empire State cooperative.

When Visions Federal Credit Union initially invited Ty Muse to interview for the cooperative’s CEO position, Muse, who was satisfied with his role as CFO at a nearby credit union, declined.

“I was a finance guy,” Muse says. “I was living near where I grew up and was making an impact in my community.”

But after thinking it over, he saw the role for what it was: an opportunity.

“How many large, strong credit unions only a few hours from my hometown was I going to come across that wanted to talk to me about becoming the CEO?” he says.

Becoming CEO provides a new perspective from which to view the inner workings of an organization.

“How many times have you said, ‘If I was running this place, I’d do ‘this,’” Muse says. “When you’re the boss, the buck stops with you.”

It’s true; as the CEO, Muse no longer works for someone. There’s no barrier between his work and the membership. He’s in charge, and this fact of life has required him to develop a higher degree of patience than for previous roles.

“Before, I’d have a CEO who might be a barrier to getting work done, and I’d ask, “Why is this taking so long?’” he says. “Now, I don’t have that barrier. It can be easy to say, ‘I want this done, so let’s do it!” As a best practice, remaining patient and trusting your staff to prioritize is a virtue. 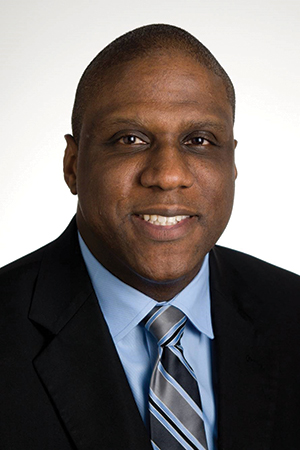 When he started at Visions, Muse brought with him ideas developed over years of working for other credit unions, GE, PricewaterhouseCoopers, and Goldman Sachs. He believes in a leadership style rooted in positivity, servant leadership, simple messages, and winning.

“I believe in winning,” he says. “It proves that our value proposition is worthy, and it creates energy in our credit union. I think that’s contagious.”

He also believes in confidence and what a belief in one’s own abilities can do for the greater organization.

“Confidence permeates throughout the organization,” Muse says. “Our team believes we can do anything. We can make a difference and help people more than others can.”

During his time as CEO at Visions, Muse has created new departments and roles, shared member success stories, and developed a strategic partnership with a local university. But he also has identified personal areas of improvement and learned several lessons, an important one being that organizations do not change overnight.

“You walk in and think you can change the world,” Muse says. “The books say it takes seven years to change culture.”

Another important lesson is that setting a shared strategic direction helps the organization sharpen its focus.

One thing he has learned he can’t work on enough is communication. Muse believed he was a good communicator when he became CEO, but the position has demanded an even higher level of communication than he anticipated.

“You can never over-communicate,” he says. “I’ll say something, write it in an email, and say it again. A month later, people will still ask, ‘What are we doing?’ Communication is one of those things you can’t overdo."

But simply repeating messages isn’t enough. Muse has learned that speed of communication matters, too, and he’s found tools to help him better distribute those communications.

“It’s a bit like pouring water into a hole,” he says. “If you pour it too fast, it takes too long to permeate. But if you pour it at the right speed, the water doesn’t overflow or spill out. It’s just absorbed.”

Organizational Change And Tips For A New CEO

When Muse took over as CEO at Visions, he took stock of the credit union and considered what worked well and where there were opportunities to grow.

He uncovered several areas he wanted to address, including setting a common goal and creating better communication. Additionally, he identified a need to empower employees and develop leaders.

“The organization had a strong leader before me,” he says. “My employees were good, they just weren’t empowered. I don’t think they were able to take the next steps in their career. So, I wanted to reinvest in those areas.”

But even when change is good, it can be difficult for those who have grown accustomed to a certain way of working and a certain leadership style. Muse reckoned with this and realized to elicit change, his actions needed to prove he was serious.

“The team was excited, but a lot of people say they want something when they really don’t,” he says. “They think, ‘If I make a mistake, how will he react?’ If you want to change culture, then you can’t penalize people for making mistakes. That’s sending the wrong message.”

Muse strove to be honest from the beginning and have frank conversations with his vice president-level staff and above. Some easily embraced the changes Muse wanted to implement and jumped in with two feet. Others disagreed with his direction. That was OK, too. Muse didn’t let anyone go during his transition, but some staff members did phase out naturally with no hard feelings. All in all, he believes the growing pains helped the credit union grow to where it has today — bigger, more diversified, and with operation centers in three states.

“I told everyone that it was OK if they disagreed and didn’t want to be a part of this,” the CEO says. “But if they couldn't get onboard with at least a few of the core values I felt would help Visions get better, we’d stop the bus and help get them where they wanted to be."