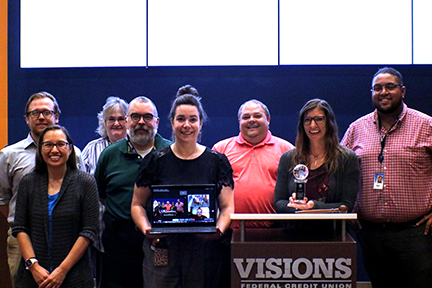 Visions Toastmasters Club was chartered in June 2018 as part of Region 9, District 65. It has received Distinguished Club honors since its inception. Comprising employees from across the organization’s New Jersey, New York, and Pennsylvania footprint, the closed club holds hybrid meetings so that in person and virtual attendees may participate.

“The Visions Toastmasters club is a unique opportunity for employees to grow outside of their normal work duties,” says Derek Matts, Organizational Development Manager. “We’re able to gather diverse voices and develop them across our three-state footprint, which for us is really exciting.”

The club’s president, Emily Roma, agrees. “I’ve seen so much personal growth since I started working with Toastmasters. I get to interact with my peers in other states and departments – people I might not otherwise get to work with. It’s increased my confidence as a person and it’s translated directly to my work.”

For Visions, that growth is the goal, says Matts. “If you were to survey almost any organization, ‘communication’ would probably come up as the biggest pain point. By opening the doors to all employees to participate – not just those at our headquarters – we can create a culture of growth and confidence for everyone. That’s something we see a lot of value in, which is why we rebate almost all the costs for our members’ continued participation.”

“Winning this award is a testament to our hard work,” says Roma. “It takes a lot to put yourself out there and I’m proud of everyone’s dedication. I can’t wait to see the program continue to grow!”

Toastmasters International is a nonprofit educational organization that teaches public speaking and leadership skills through a worldwide network of clubs. Headquartered in Englewood, Colo., the organization's membership exceeds 364,000 in more than 16,200 clubs in 145 countries. Since 1924, Toastmasters International has helped people from diverse backgrounds become more confident speakers, communicators, and leaders. More at www.toastmasters.org.