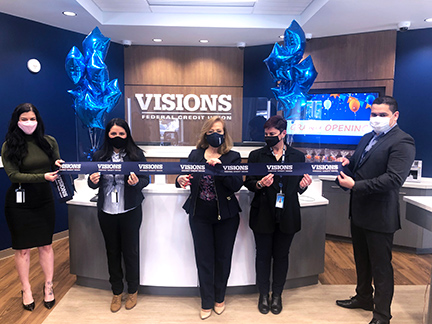 “New Jersey has been an important part of Visions’ trajectory for years now, and this new office reinforces our dedication to both our new and existing members,” said Muse. “If 2020 taught us anything, it’s that people need options. This new location and our virtual grand opening really cuts to the core of that.”

To celebrate the new branch, there will be weekly prize drawings throughout the month. Visions will also be collecting donations for their charity partner, the Boys and Girls Clubs of Northwest New Jersey. New and current members can also stop by for their limited-time $250 Auto Refinance Bonus, which is only being offered at the Fairfield branch.

The branch is located at 653 Route 46 W and includes a full-service teller line, walk-up and drive-up ATMs, and a free coin-counting machine for members. The location also participates in the Co-Op Shared Branching Network for participating credit unions.