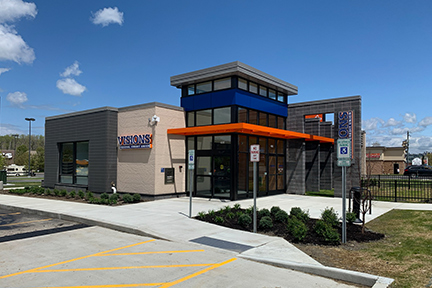 The new office includes a full-service teller line, ATMs, and even a free electric car charging station for Visions members. Visions is also completing construction on a nearby outdoor amphitheater for special events and concerts in the future.

The office is open from 9 AM to 5 PM, Monday through Friday, with Saturday hours from 9 AM to 12 PM. As Visions celebrates this new location, we invite the community in to enter weekly prize giveaways and contribute donations for the Child Development Council.

“I’m excited about our new office and the feedback has been extremely positive,” said Branch Manager, Eric Gergel. “It’s been a pleasure welcoming our existing members and introducing new ones to the Visions family. If you’re in the area, please stop in and see what we can do for you!”