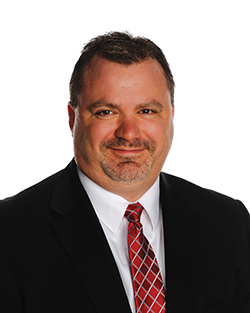 A dynamic leader with 23 years of experience with Visions, Wayman worked with President/CEO Tyrone Muse to introduce the Business Performance department six years ago. This push has been central to Wayman’s role within the organization, where he now leads a team of nearly 20 specialized employees to streamline Visions’ processes, eliminating inefficiencies and providing data driven insights.

Wayman specializes in performance analytics, process improvements, and strategic planning. His expertise is backed by certifications in strategic management from the Wharton School, data sciences from MIT and Johns Hopkins, and process re-engineering from CSSC as a Lean Six Sigma Black Belt. He is a graduate of the Broome Leadership Institute, the Cardwell Leadership 306 Group, and holds a Master’s of Science Management degree.

His qualifications and abilities in the field have led Visions to countless improvements for member service and employee satisfaction, as well as millions in additional revenue or expense reduction through data-driven campaigns, systematic innovations, and Robotic Process Automation (RPA).

Wayman says his role provides value throughout the Visions organization, benefiting both members and employees. “Effective innovations like RPA can take care of the repetitive, mundane tasks so our employees can stay productive with more engaging work,” said Wayman. “Engaged staff means better service to our members and stronger relationships with our communities, and deepening those relationships are key to making Visions matter.”

About Visions
Visions Federal Credit Union is a not for profit financial institution completely owned by its members. Established in 1966, Visions proudly serves over 220,000 members in communities throughout New Jersey, New York, and Pennsylvania. Services include banking as well as auto, home, personal, and business loans. Visit www.visionsfcu.org for more information.