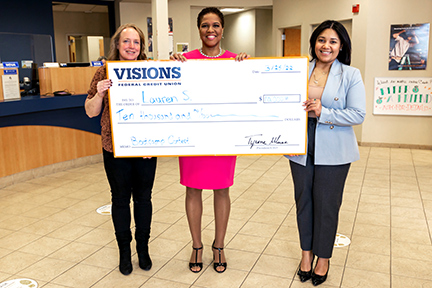 TEANECK, N.J. – Financial Wellness Bootcamp, a contest from Visions Federal Credit Union, has concluded and Lauren Singleton of Teaneck is the grand prize winner of $10,000.

Last year, Singleton started a nine-month, guided curriculum to help her reach her financial goal of becoming debt-free and increasing savings. Contestants met monthly with a designated branch coach and Financial Wellness Officer, engaged with financial wellness resources, and even had a one-on-one meeting with President and CEO Ty Muse.

“The most positive part of meeting Lauren is her energy, optimism, and her will to be successful. She was so excited to start this program, she went online and bought a budget book and everything,” Dumont Branch Manager Tammy Lamazza said. “She also did not let her situation bring her down, so I knew that with hard work she could better herself.”

During Financial Wellness Bootcamp, Singleton increased her credit score by more than 10 points, reduced debt by more than $1,250, and increased savings by more than $675. Based on the progress made towards her goal and other milestones achieved, Lauren was named the grand prize winner of the contest.

“Visions is always looking for unique ways to give back, so we presented this opportunity to our members to show the community what is possible when they work with us,” Visions President and CEO Ty Muse said. “We hope that Lauren will serve as an inspiration to others looking to improve their personal finances, no matter what that goal may be.”

Visions invited members from all the communities they serve across three states to apply for the program. Singleton joins Courtney Zaryski of Syracuse, New York; Beatriz Monterroso of Glen Gardner, New Jersey; and Robert Moore of Bingamton, New York, as winners. Learn more about the contest and contestants at visionsfinancialwellnessbootcamp.com.

About Visions
Visions Federal Credit Union is a not for profit financial institution completely owned by its members. Established in 1966, Visions proudly serves more than 230,000 members in communities throughout New Jersey, New York, and Pennsylvania. Services include banking as well as auto, home, personal, and business loans.