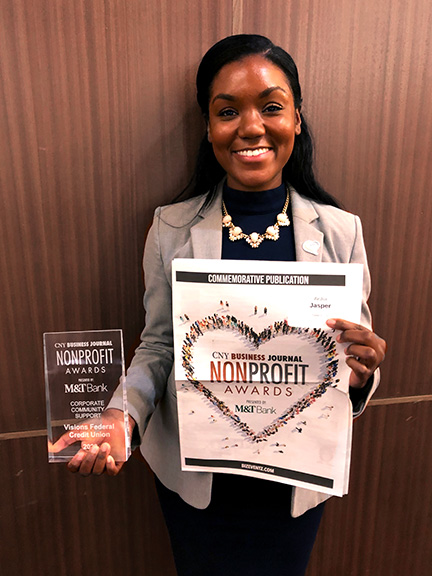 Syracuse, NY – Visions Federal Credit Union was presented with the Corporate Community Support award by the Central New York Business Journal at an event on August 12th. This award was granted based on the various volunteer initiatives that Visions supports, both through monetary giveback and employee volunteerism.

Aisha Jasper, Visions’ Community Development Liaison, was on hand to receive the award. Speaking to the organization’s culture of volunteerism, she said, “It’s important to meet the people where they are. Visions connects our employees with nonprofits across all the areas we serve, helping to expose them to issues and challenges they may otherwise not be aware of.”

This community outreach is facilitated by the Visions Cares program, which provides individuals across New Jersey, New York, and Pennsylvania with grants, donations, sponsorships, and employee volunteer opportunities. In all, Visions donates over one million dollars annually, with employees providing hundreds of volunteer hours each year.