Held the second Friday of June, July, and August, each concert featured a different band, covering a range of music from the 80s to today. The city of Binghamton and Broome County helped event staff to close traffic to Stuart Street, where a concert stage, tables, and vendors were set to entertain attendees outside the arena. Visions representatives provided prize drawings and giveaways, including other concert tickets, Visions swag, and gifts cards to local businesses courtesy of the Binghamton Local Development Corporation (BLDC). 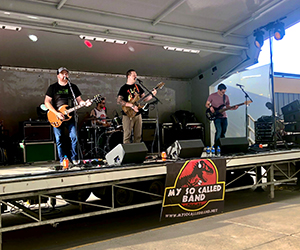 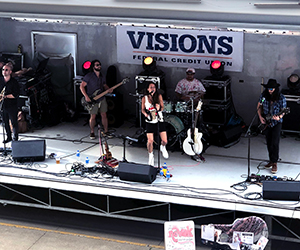 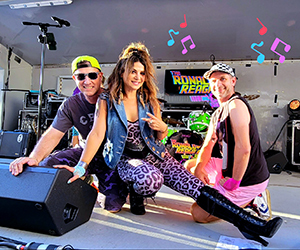 “We really wanted to promote local business and encourage people to check out the downtown area” said Visions Promotions and Branding Coordinator Lindsay Baker. “Thanks to support from Broome County, the city of Binghamton, community partners like Mirabito Energy and MB Yonaty Development, these events became a big hit.”

Audiences enjoyed food and beverages from arena vendors and a rotating selection of food trucks, traditionally featured at Binghamton’s Trucks on the Tracks. Local professional hockey team, the Binghamton Black Bears joined the last night of the series to offer a pre-season meet and greet featuring athletes, mascots, and new merchandise.

“That final night, 80’s Night, drew our largest crowd yet, with well over 1,000 attendees,” said Baker. “We can’t wait to make it even bigger next year!”

Visions Federal Credit Union is a not for profit financial institution completely owned by its members. Established in 1966, Visions proudly serves more than 230,000 members in communities throughout New Jersey, New York, and Pennsylvania. Services include banking as well as auto, home, personal, and business loans.