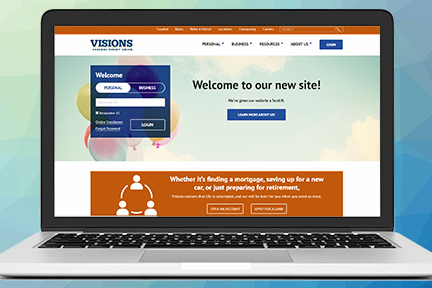 Endwell, NY (Oct. 3) - Visions Federal Credit Union has revamped its website to make it more user-friendly and informative. This new design makes it easier for members to identify helpful resources – all while retaining the functionality they have come to expect.

One of the more noteworthy changes to the website is the addition of the “Articles and Magazines” section under the Resources tab. These articles cover topics ranging from refinancing student loans and auto loans to identity theft and homeownership. Representing Visions’ commitment to its members’ financial wellbeing, these articles are designed to be resources for any and all stages of life. In addition, all articles are available in both English and Spanish.

Phase two of the updates made to Visions Federal Credit Union’s website will focus on enhancing the online banking portal for all members, an upgrade scheduled for November 6th.