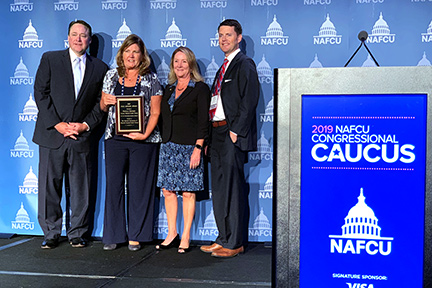 “It’s an honor to be recognized with NAFCU’s Paul Revere Award”, said Shermot. “Credit unions bring tremendous value to their members and local communities, and I’m proud to advocate on their behalf. With the ongoing support of our President/CEO and leadership team, I look forward to continuing to be a strong, reliable grassroots advocate.”

Visions’ President/CEO, Ty Muse, sees great value in Shermot’s advocacy work. “Trish has been active in building relationships with representatives at the local, state, and national level,” said Muse. “We serve over 200,000 members, and her work means that their voices are heard in legislatures throughout our three-state footprint.”

Shermot actively participates and brings the credit union voice to various congressional offices across New Jersey, New York, and Pennsylvania. In the past year alone, Shermot met with more than 20 separate congressional offices. During those discusses, she ensured lawmakers were well educated on the benefits credit unions provide to their members and local communities.