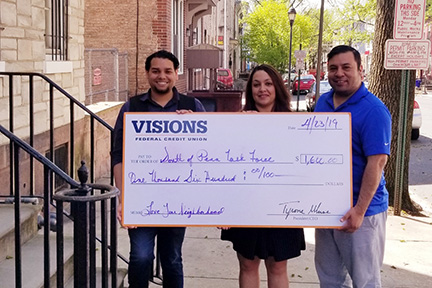 Reading, PA – Visions Federal Credit Union presented the South of Penn Task Force with a donation to offset food costs for their volunteers throughout the end of the year.

South of Penn is a city-based community action group that organizes monthly neighborhood cleanups for the communities south of Penn Street in Reading, PA. The Task Force brings together neighbors and other volunteers to help clean the neighborhood, get to know each other, and create a sustainable community that Reading’s citizens can be proud of.

Visions’ Director of Impact and Engagement, Lizette Epps, was on hand to present the donation to South of Penn’s Daniel Egusquiza and Tony Veloz. “We’re proud to support the South of Penn Task Force for all the hard work they do to make our community a better place to live,” she said.