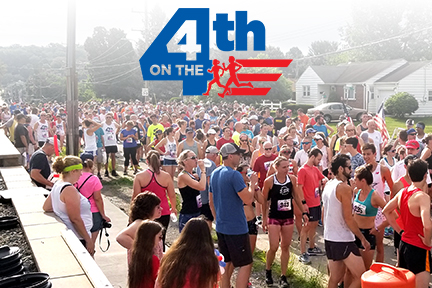 TOWN OF UNION, JULY 4TH, 2018 – 400 runners kicked off their Independence Day festivities by engaging in the first ever 4 on the 4th Road Race in the Town of Union.

The four-mile marathon – the newest in the Empire Road Race series – was organized by Visions Federal Credit Union, who kicked off the early morning event at their Country Club Road headquarters in Endwell, NY.

As an inaugural event, Community Development Manager Tim Strong couldn’t have been happier with the results. Coming off the pavement, he said, “We set out to throw a great race in our local community that not only gave runners something to talk about, but the local neighborhoods and businesses as well. We feel we absolutely accomplished that goal and can’t wait for year two – it’s already in the works!”

With nearly 600 attendees engaging in activities ranging from kids’ arts and crafts to a DJ and breakfast items, the 50+ volunteers helped ensure that everything ran successfully and smoothly.

In addition to drawing attention to the community and its businesses, Visions donated $2500 to its charity partner, the John Mack Foundation. Since its inception, the organization has worked to put AEDs in public places, greatly reducing the instance of death from sudden cardiac arrests.

"To have so many volunteers and sponsors and people to make sure that we can get awareness and work together as a team, and as a community, it means the world to us." said Erin Mack-Slavik, John Mack's sister.