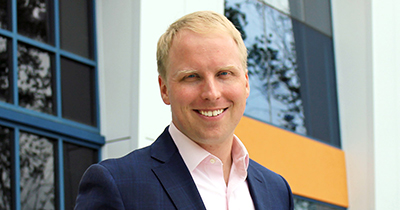 Technically, Thomas Novak is the director of digital banking, but you’d be hard pressed to find anyone more committed to the credit union mantra of “people helping people.”

According to Novak, when he came to Visions Federal Credit Union, a $4.1 billion asset credit union in Endicott, N.Y., he knew “little of credit unions.”

Novak spent the first half of his career in the banking industry, but he was intrigued by credit unions and their focus on the community. After he and his wife moved to her hometown, Novak saw an opening at the credit union. He applied for and got a job as its branch manager.

‘I often say it always comes down to people.’

“Since then, I’ve been able to learn how Visions and credit unions overall bring a significant positive impact to the communities they serve,” Novak says. “Seven years in, I’m proud to say that I am a part of that.”

Named to head up an e-commerce division five years ago, Novak has made a substantial difference. Through process improvements and technological solutions, Novak has:

At the heart of all these results is Novak’s passion for people—those he works with and the credit union’s members.

“I often say it always comes down to people,” he says. “When making strategic decisions or looking to implement a new technology, I start with how it impacts people: my team; other credit union staff; and, of course, our members. Connecting with people is an extremely engaging process for me, whether directly via a face-to-face interaction or indirectly via one of our systems. The more focus I place on their experience and their emotions, the better served we all are.