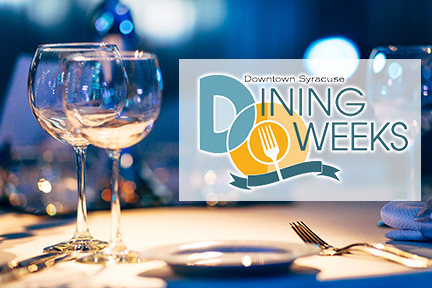 Keeping with tradition, 35 restaurants – all locally owned – will serve three course dinners for $25 (or less) during traditional dinner hours, and 21 restaurants will serve three course lunch offerings for $10 (or less). This is the first time in the program’s 14-year-history that Downtown Dining Weeks has included lunch. The Downtown Committee added the lunch component to benefit Downtown restaurants that are only open during lunch hours, and provide diners with the opportunity to discover new favorite lunch stops. A list of all participating restaurants is provided in an accompanying attachment.

Downtown Dining Weeks started in 2005 to stir business during what typically is a slower time of year for dining. The once-a-year promotion has grown every year since, continuing to attract new restaurants and new diners each year. Last year, the two-week promotion attracted an estimated 45,000 diners from Onondaga, Cortland, Madison, Oneida and Oswego Counties.

“Downtown Dining Weeks offers unique opportunities to sample the high-quality, and variety of cuisines that the center of our city is known for, and it’s become one of the most-anticipated events of the winter,” said Merike Treier, Downtown Committee of Syracuse executive director. “This year, we’re excited to introduce a lunch component. We hope it will be a fun way to include restaurants that are only open for lunch, and that the special menus offered will encourage the 28,000 employees who work in Downtown Syracuse to step away from their desks and enjoy lunch out with friends. We are thankful to have Visions Federal Credit Union’s support as we invite everyone to experience Downtown’s full flavor!”

The Downtown Committee welcomes the support of Visions Federal Credit Union as its title sponsor of Downtown Dining Weeks for the second year in a row. With more than 191,000 members across New Jersey, New York and Pennsylvania, Visions boasts 4,500 members in Onondaga County. It has two offices in the Syracuse area, serving neighbors in Syracuse and Cicero, and will soon install an ATM in the new Redhouse space located at 400 South Salina Street.

“Visions is delighted to once again be the presenting sponsor of Downtown Dining Weeks,” said Timothy R. Strong, Community Development Manager for Visions Federal Credit Union. “To see the program grow, with the number of participating restaurants and the great addition of the lunch specials, is a testament to the positive energy happening in Downtown. We’re proud to stand with our partners like the Downtown Committee, and help support their initiatives.”

For the second consecutive year, Downtown hotels are inviting guests to stay overnight at a discounted rate as part of a “Sleep Over Package.” First introduced last year, guests who stay at the Marriott Syracuse Downtown, the Jefferson Clinton Hotel, Courtyard by Marriott at Armory Square and the Residence Inn by Marriott at Armory Square, will receive a special $185 room rate during the two-week Dining Weeks promotion. Guests who show a Dining Weeks dinner receipt will have the option to receive an additional $25 off their room rate.

New to the promotion this year, the Downtown Committee is partnering with the Food Bank of Central New York to help stock its pantries and feed the hungry in our community. There are three ways that Downtown Dining Weeks patrons can help the Food Bank: 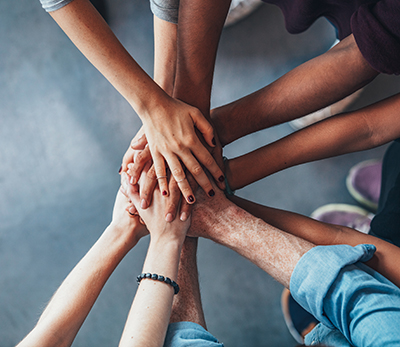 For every $1 donated, the Food Bank can provide three meals for an individual in need. Every day, the Food Bank provides enough food for more than 32,300 meals in our community.

“What better way to build awareness that hunger exists in our local communities than engaging local restaurants and customers,” said Kathleen Stress, Executive Director of the Food Bank. “This is a great partnership to elevate the understanding that one in seven individuals are food insecure, but that there is a way to help. By making a pledge to donate, or bringing non-perishable goods for parking lot discounts, you are helping feed the hungry. Every bit helps to ensure that families have the food they need to feed their families. We truly appreciate the opportunity to be part of the well-esteemed Dining Weeks while helping to provide wholesome food to those in need.”

Dining Weeks patrons can look forward to the continuation of the “Spot the Chef’s Hat” contest this year. Each restaurant will have at least one chef’s hat placed somewhere visible in the dining area(s). Diners are encouraged to spot the chef’s hat, take a picture of it, and email the picture – or a thorough description of its location- to mail@downtownsyracuse.com, explaining where and in what restaurant they saw it. All correct guesses will be entered into multiple drawings for gift cards/gift certificates. Winners will be notified through email.

For more information about Downtown Dining Weeks, including a list of all participating restaurants, please visit http://DowntownSyracuse.com/DiningWeeks. Menus will be posted there, and updated as restaurants continue to submit them.

About the Downtown Committee of Syracuse, Inc.

The Downtown Committee of Syracuse, Inc. is a private, not-for-profit, professional downtown management organization representing all property owners and tenants within the central business district. The Downtown Committee undertakes programs to improve downtown's image, strengthen its economic base, increase its attractiveness, and assure that it's clean, safe and accessible. For more information, visit www.downtownsyracuse.com.